Key Pen Parks purchased this 39-acre property in June 2012. It was procured with Key Pen Parks capital and a matching grant from the State of Washington Recreation and Conservation Office.

In 2014 and 2015, public workshops were held to discuss the community’s desired features. Robert Droll, a landscape architect specializing in park design, worked with the community to create three conceptual designs which were presented to the public in late 2014. Public feedback on those concepts was then analyzed and a final design concept unveiled to the public in March 2015.

On April 13, 2015 the park district's board of commissioners voted to approve the adoption the design concept as the master plan for Gateway Park. It includes sports fields, playground, restrooms, a splash pad, amphitheater and more. It’s proximity to 360 Trails will allows for a trail head from Gateway Park. Construction of all the features will take place as funds allow.

​December 2016 the bid for construction of phases I and II were awarded to BPCI Earthworks, LLC. They began construction in late February 2016. 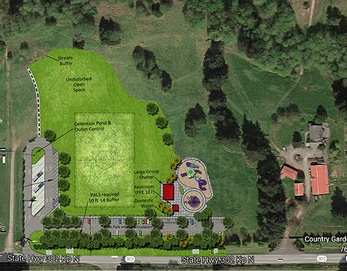 Phase 1 construction
History of Gateway Park
Are you curious about how Key Pen Parks acquired the fabulous piece of land that is being transformed into a beautiful destination park? Click here.